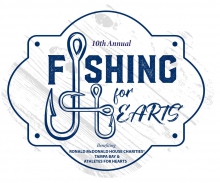 
The mission of Ronald McDonald House Charities is to create, find and support programs that directly improve the health and well being of children and their families. Four Tampa Bay Ronald McDonald Houses provide a home-away-from-home for families of pediatric patients in area hospitals.

Athletes For Hearts Inc. was created to provide financial assistance to families with children in need of medical treatment specific to a heart condition and to fund advancements in medical technology for the treatment of heart disease, with a special emphasis on heart conditions affecting children.

Anglers and captains will be registered into the tournament app by Brett from the Angler Action Foundation - any questions or technical issues can be directed to him at 561-707-8923.

***all anglers! Please email your best photos with fish to Alison at abarrick@rmhctampabay.org so you can forever be immortalized in our photo gallery!****

From Rumfish To Ft Desoto