You must have a Coupon Code to register for this tournament in the iAngler Tournament system. Please register at https://reservations.kittyhawk.com/Policies.aspx to receive your code before clicking the register button here.

Slam division is total length of three fish, one of each species (Flounder, Speckled Trout, Red Drum). Catching all three species is favored over length. For example, if an angler catches one Red Drum at 20” and no other species, they will be beat by an angler that catches a 5” trout, 5” flounder, and 5” drum. Even though the first anglers total length is 20” and the second anglers total length is 15”, the second angler wins because they caught all three species. You can only place in the slam once. No double-dipping. Fish submitted for the Slam cannot be submitted for the individual categories. Catch submissions will be automatically allocated by the director for the highest possible winnings.

Fish that do not qualify for placement in the slam division will be automatically distributed for placement in the individual divisions. You can only place once in each of the three individual divisions. If you place first in the Flounder division, you can still place in the Trout or Drum divisions but you cannot place second or third in the Flounder division.

The sea monster division goes to the angler that submits the most unique fish caught outside of the tournament species. The winner of this division is chosen by the tournament director. If you catch something interesting or different, submit it!

Fishing is allowed anywhere within the following boundaries: Wright Memorial Bridge in Kitty Hawk to the North; Hatteras Inlet to the South; Up to one (1) mile offshore to the East: as far West as the Currituck and Manns Harbor shorelines, including intercoastal waterways as far west as the Alligator River basin. Please reference the map below: 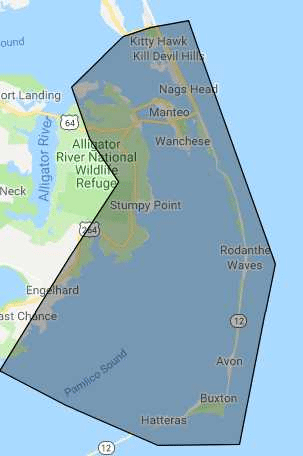 Tournament Day 1 - Lines in the Water

Tournament Day 1 - Lines out of the Water - All Photos Due

Tournament Day 2 - Lines in the Water

Tournament Day 2 - Lines out of the Water - All Photos Due