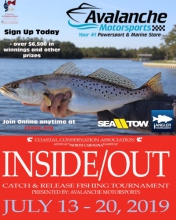 IN (red/trout/flounder)
OUT (mackerel)
| Fishing Tournament


Additional registration fee for non CCA North Carolina members. CCA membership required to participate and this additional fee will grant you a one-year membership at a $10 discount! (Current CCA NC members do NOT need to pay this.)

1 Week Long:
• Take bad weather and scheduling conflicts out of the equation!
• Tournament will begin on Saturday, July 13th @ Sunup and run through the following Saturday, July 20th @ Sunset
• You can only make it on the weekend? No problem!
Fish Where YOU want:
• Boundaries? There aren’t any!
• Thanks to the iAngler app, we are no longer limited to single day tournaments and weigh stations.
• Join CCA NC to change the way we fish and experience the future of fishing tournaments!
• 1 Requirement: All anglers must be present at Captain’s Party in Wilmington on Friday, July 12th to go over rules/regulations and to receive official tournament ruler, sponsored by SeaTow, that is required for photo submissions to be valid (If unable to attend, anglers must send someone in their place or notify CCA NC no later than Monday, July 8th to allow for Captain’s Party headcount to be adjusted and to arrange for ruler pickup)
• If you’re at the party, fish in any NC coastal waters from state line to state line!
100% Catch and Release Tournament!:
• The iAngler Tournament app allows your phone to replace the weigh station and gives your catch an opportunity to so that we can do our part to “Let ‘Em Spawn!”
• Each time you catch one of the valid tournament species’, you can take a photo of your catch on the ruler, submit the photo to our judges for scoring, and track live leaderboard updates all within the iAngler app!

Individual Angler
Non-CCA Members: Use the 'Team Registration' option to pay for tournament entry and $25 membership