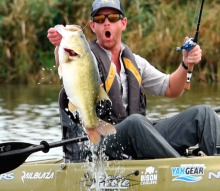 THINK YOU HAVE THE SKILL TO CATCH THE FIVE LARGEST BASS IN 28 DAYS AND WIN IT ALL?

Angler Combat is a new online tournament that challenges anglers to catch the five largest bass in 28 days. The tournament is broken down into Land, Boat and Kayak divisions. These divisions are separated into North and South regions. For $10 each month, an angler can register online to compete against other anglers in his division and region.